we are your competent partner

euroTECH Vertriebs GmbH is a medium-sized enterprise, which is able to fall back on plenty of experience in vacuum technology. As well as its comprehensive range of vacuum components, euroTECH offers sophisticated handling and transport solutions in particular. Customers value intelligently designed-lifting devices and tube lifters from the standard range, which can always be adapted to their individual needs. This flexibility is what sets euroTECH apart and is currently responsible for the creation of highly-efficient solutions for automated handling tasks that are able to cope with modern challenges. Our own construction team, an electrical department, production and assembly and comprehensive quality control are located in-house. All of this allows for real innovations and German-made quality.

Raise your expectations and elevate the amount you can save in handling with intelligently adapted vacuum technology from euroTECH!

Get in touch with us today!

Our roots - the euroTECH company history

1996 Peter Bunnenberg established the company “Euro-Tech Vakuumhebe- und Transporttechnik” (Euro-Tech Vacuum-Lifting and Transport Technology). Parallel to this, its cooperation partner EUROTECH VACUUM TECHNOLOGIES CO., CTD. (Formerly DeJames INTERNATIONAL) was set up in Taichung, Taiwan, to produce rubber and natural rubber parts. Back then, the assembly of the lifting devices was still taking place in his own garage, which quickly became too small.

2001 the company moved to Dammstrasse Geislingen, near to the town of Balingen, because the premises had become too small due to the large numbers of orders.

2008 the owner-operated Euro-Tech was transformed into euroTECH GmbH. Over the next few years, the company grew continuously.

2012 Thomas Schulz took over the company and has been successfully leading it under the name “euroTECH Vertriebs GmbH” right up until the present day. The large number of orders increasingly meant that the business premises in Geislingen and the production facility in Balingen were being stretched to their limits. The euroTECH name became established as a strong partner in the wood and glass industry.

2020 ground was then broken for an extensive new build on Maybachstrasse in Rosenfeld. So, just one year later it was, “Back to our roots in Rosenfeld!” In just one week the euroTECH team managed to move from Geislingen to Rosenfeld. Since May 1, 2021, the new business premises with 2,245 m² of production and storage space, as well as 740 m² of office space, has been the new home of the euroTECH family. We have room for construction, an electronics laboratory, production and assembly, management, sales, and customer service, all under one roof. The short distances between everything and the expertise concentrated in one place are an unbeatable advantage when it comes to innovative and customer-oriented solutions for German-made vacuum technology.

2022 euroTECH offers more power and flexibility than ever before. This has been communicated to the outside world with the “eTVac Handling” logo redesign and a new Internet presence at www.etvac.de. The high level of flexibility in relation to customization, the combination of handling and robotics for automation, as well as our Litocran as an innovative lifting module for telescopic handlers and cranes in construction are promising business areas. 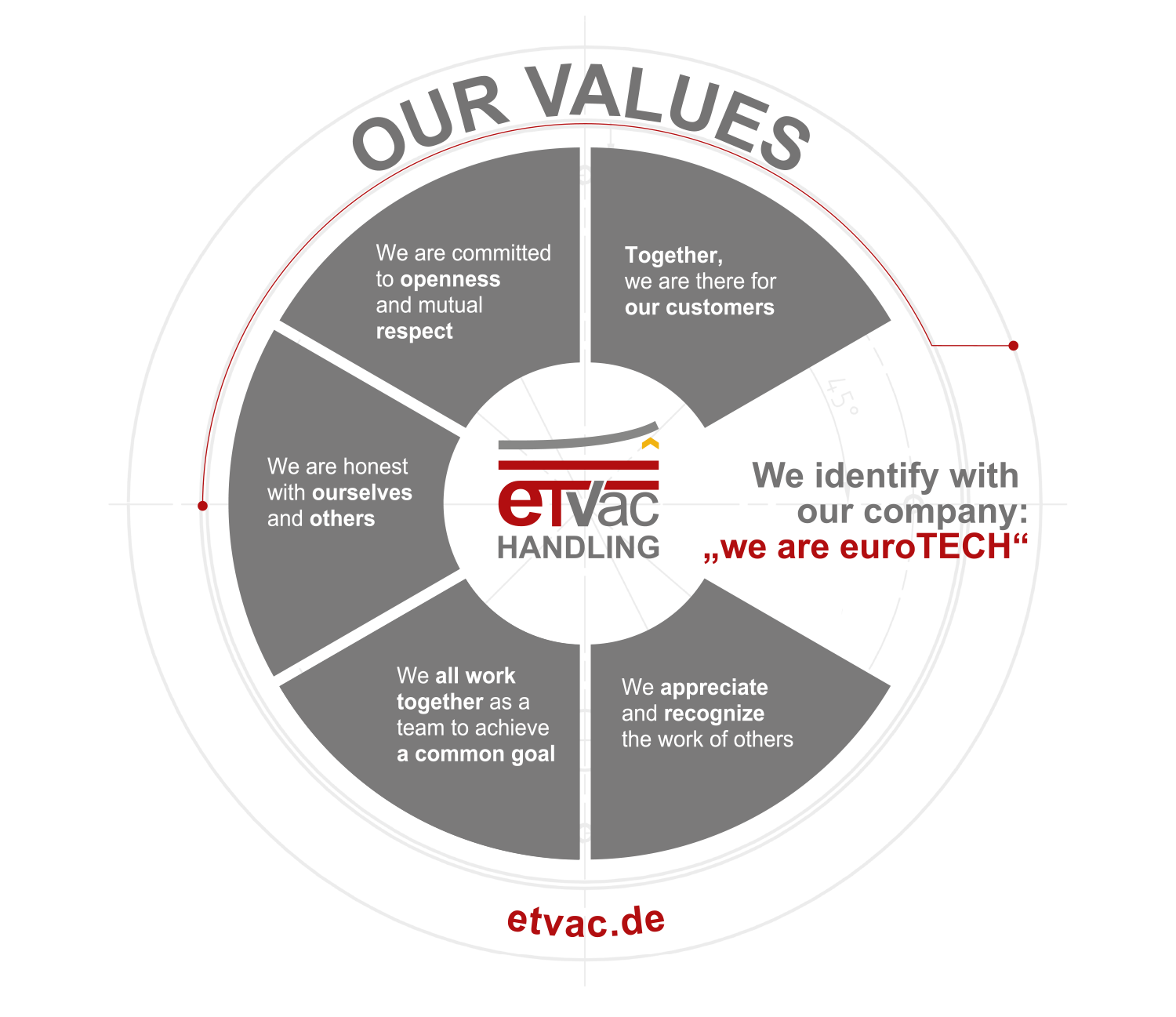 Our wings - the euroTECH company philosophy

Much has changed since Otto von Guericke impressively demonstrated the effect of air pressure (vacuum) in 1654. Here at euroTECH, we see this history as being connected to a “tradition to innovate”, that has taken vacuum lifting technology from the age of industrialisation to the age of digitisation and automation. For us, the euroTECH slogan, “The smart way to lift loads”, applies in precisely those situations in which others still rely on conventional mechanical handling solutions. We demonstrate how efficient vacuum technology can be when used properly. Our performance promise, “You can get yourself moving with euroTECH”, guarantees you a dynamic approach to your handling tasks. A motivated and experienced team forms the basis of our success. On top of our enthusiasm for effective technology, the total satisfaction of our customers is something close to our heart, we simply want to make you totally happy!

eurotech in a few words

How do our customers describe us?
»High-performance »Innovative
»Solution-orientated »Flexible
Everything from one source, German-made

you want to know us?

do it right - come to euroTECH!

Let yourself be captivated and contact us for a personal consultation.